Garry loved the theater with the passion of a very, very young man. He reminded me of all of us when we first fall in love with a life in the theater. — Friend and playwright Terrence McNally 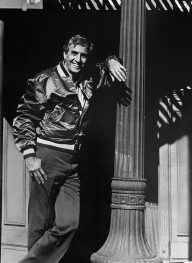 When the late, great Garry Marshall passed away last year, he left behind legacies large and small. The actor, writer, producer and director’s vast body of work in film and television touched the lives of millions of people around the world, and made the careers of Henry Winkler, Robin Williams, Julia Roberts, Anne Hathaway and many others. But the entertainment industry giant was also a playwright with a love for live theater that stemmed from childhood. One of Marshall’s lesser-known but equally meaningful gifts to the arts was an extension of that passion: the Falcon Theatre that he founded on West Riverside Drive and Rose Street in Toluca Lake, the community that was his home for five decades.

Built from the ground up and run by Marshall and daughter Kathleen, the 130-seat performance venue hosted a broad spectrum of memorable productions for two decades, ranging from Death of a Salesman, starring Jack Klugman, to Garry’s own play Wrong Turn at Lungfish, starring lifelong friend Hector Elizondo, to the energetic Shakespearean musical mashups from the Troubadour Theater Company.

“Garry’s vision was that all people should go to the theater,” says Kathleen, who serves as the chief executive officer of the theater’s board of directors. “He thought that a live experience of people sitting in a room, seeing a theater experience, was really important to our lives and to how we communicate with each other.”

In fact, Marshall was so committed to providing that community resource to Toluca Lake that he funded it out of his own pocket.

“He paid for every single thing; we called it his yacht,” says wife and Board Chair Barbara Marshall. “He painted it, he paid for everybody that worked on it, and he never raised a penny. He really loved it so much. I often said he made a movie every year so he could support the theater.”

Visitors to the former Falcon Theatre may have even witnessed Marshall’s “comprehensive” approach to his pet project, from the artistic direction of productions to stacking cars in the parking lot on show nights.

Wanting to build on Garry’s legacy and honor him in a meaningful way, over the past year the Marshall family, longtime colleagues and the Falcon Theatre’s board of directors spearheaded a plan for the venue’s long-term existence, rebranding and relaunching as the Garry Marshall Theatre this July. Restructured as a nonprofit based on the regional theater model and striking out in a bold new artistic direction, the Garry Marshall Theatre has entered a phase of innovation and vitality that would make its originator proud.

“We’re so excited to be able to even do more than he ever thought we could at this space,” says Barbara.

As part of the theater’s rebranding campaign, the board enlisted the talents of local graphic designer Todd Gallopo of the agency Meat and Potatoes to create a new logo, which he based on Garry’s actual signature. Renovations on the theater’s façade and lobby took place over the summer, culminating in a September 21 red-carpet event in which the eponymous marquee was lit for the first time to the cheers of a star-studded crowd of Marshall’s friends, family, industry colleagues, theater staff, neighbors and supporters. Guests included Laurie Metcalf, Joe Mantegna, Fritz Coleman, Marion Ross, Anson Williams and Hector Elizondo, who appeared in all 18 of Marshall’s movies.

Immediately after the marquee lighting, a sold-out crowd headed to their seats for the preview of Terrence McNally’s Master Class, directed by Dimitri Toscas and starring Daytime Emmy-Award-winning actor Carolyn Hennesy as opera diva Maria Callas. Master Class is the first of the inaugural season’s four-show subscription series tying into the overarching theme of the power of art.

“We wanted to do some plays that we felt were important to this time and the world we’re in now,” says Kathleen. “We felt that Master Class was such an amazing opening because it talked about art and how important it is to the world, as well as the value of artists and believing in yourself as an artist.”

In a touch of kismet, she notes that the opening-night date coincided with the granting of the theater’s official tax-exempt status. “I think that’s my dad; he liked organized numbers,” she says. “When we got the notice and opened it, we saw that it was stamped September 22, the exact day of the opening. We just thought it was a good sign.”

The Power of Art, Up Close

The inaugural subscription series speaks to who Marshall was as a human being, according to Artistic Director Joseph Leo Bwarie: “Garry loved the darker side of entertainment and he loved darker side of art. He knew there’s more value in a laugh if it’s positioned against something that’s real.”

Each play focuses on a different discipline of the arts, in a variety of settings and styles: opera in the dramatic Master Class, theater itself in the musical comedy A Funny Thing Happened on the Way to the Forum, an intimate look into the life of sculptor Louise Nevelson in the West Coast premiere of Edward Albee’s Occupant, and writing for the golden age of television in Neil Simon’s Laughter on the 23rd Floor. Ultimately, however, there’s a common thread, says Artistic Director Toscas: “It’s trying to define the human condition. It’s trying to speak to how we look at ourselves and how we express ourselves as people.” 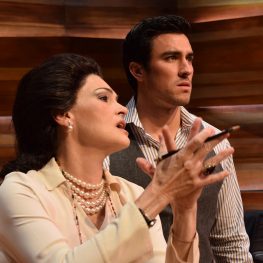 The high level of professionalism in a space as intimate as the Garry Marshall Theatre is unique in Los Angeles. “You get to see something that would normally be on a big stage somewhere,” says Bwarie. “The front row sees the sweat start to bead up on the forehead of the actor.”

The physical proximity of the performers and the audience members is hugely impactful to both. “In live performing arts, part of the formula is that there be a full audience so that that energy bounces back and forth from the stage and seats, like a ping-pong match,” Bwarie explains. “In our intimate space, the audience is really the next character in the piece.”

Actor Hennesy concurs. “Audience connection (and so true in Master Class) — the delicious silences when you know people have forgotten to breathe, the laughter that comes like a clown between the daredevil acts — all are so important to the soul of a performer,” she says. “The goal is to leave it all out on the stage every time.”

A Star in the Community

While live performances and developing up-and-coming talent will always be the Garry Marshall Theatre’s top priority, its leadership is committed to having the space serve as a community resource and cultural hub into the future. Executive Director Sherry Greczmiel and Artistic Directors Bwarie and Toscas are bursting with ideas to engage people of all ages and interests, including the film series currently underway (all 18 of Marshall’s movies in chronological order); Modern Masters Series classes, recently kicked off by television legend Norman Lear; and special holiday, summer and children’s programming (“Garry always said, ‘something for the kids,’” says Bwarie).

“We hope to be one of the focal points of Toluca Lake,” says Greczmiel. “We’re reaching out to the community and the patrons and hoping they will help support us in this new venture and keep the lights on in Toluca Lake.”

“We feel that when you get people talking in their own community, it’s a good thing —and when they experience something in a theater that moves them, that’s a really important piece of their lives,” adds Kathleen. “That’s what we’re offering, and we want it to live on in Garry’s memory, because he believed in the importance of theater for everyone.”

Sarah Scott is a senior editor for Toluca Lake Magazine.