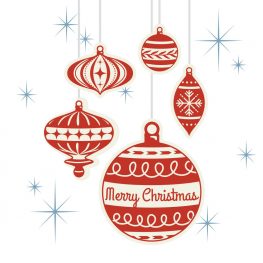 Always a home to creative geniuses, Toluca Lake holds a notable spot in holiday-music history: One of the most popular seasonal tunes of all time, “The Christmas Song” by Mel Tormé and Robert Wells, was written here.

In his memoir It Wasn’t All Velvet, Tormé described that day in 1945: “One excessively hot afternoon, I drove out to Bob’s house in Toluca Lake for a work session. The San Fernando Valley, always at least 10 degrees warmer than the rest of the town, blistered in the July sun.” Tormé noticed four lines of verse, beginning with “Chestnuts roasting on an open fire,” jotted on a notepad next to Wells’ piano. When Tormé asked about it, Wells replied, “It was so damn hot today, I thought I’d write something to cool myself off. All I could think of was Christmas and cold weather.” Tormé saw the potential for a song, and as he recalled, “We sat down together at the piano, and, improbable though it may sound, ‘The Christmas Song’ was completed about 45 minutes later.” Nat King Cole recorded the song in 1946, making it an enduring holiday standard.

Another musical holiday staple from the 1940s with a very similar L.A. origin story (the often-omitted opening verse describes seeing sunshine and palm trees while “longing to be up north”) is Irving Berlin’s “White Christmas.” While that song references Beverly Hills, there is, of course, a Toluca Lake connection: The singer who made it a hit and became inextricably linked to it was Bing Crosby, one of the neighborhood’s best-known residents. But the local ties don’t stop there. When “White Christmas” became the basis for a movie of the same name in 1954, the composer who wrote the score for that now-classic holiday film (as well as the iconic Road movies starring Crosby and another famous Tolucan, Bob Hope) was Joseph J. Lilley — who that same year bought a house in Toluca Lake on Moorpark Street, where he resided until his death in 1971.