It’s practically unheard of for a runner to never have been injured. But sports podiatrist Dr. Franklin Kase, D.P.M., of Providence Saint Joseph Medical Center and Burbank Podiatry Associates Group, can boast such a nonevent. In his 40 years of running, he’s completed 50 half marathons and six full marathons without suffering any leg or foot injuries. “I’m 66 and I feel great,” he says. We asked him about his secrets for staying injury-free and his tips for choosing a supportive shoe.

Kase credits the following routine with keeping him running.

Kase emphasizes, “It’s critical to have a good supportive shoe in whatever activity you do. [That alone] is going to reduce the risk of injury. Tremendously, that’s why I’ve really been able to prevent injury.”

Also, because many people wear lousy shoes at work and then wear “not-so-great shoes” when exercising, Kase notes, they’re going to be much more prone to foot, ankle and heel injury.

“Go to a running shoe store and get properly fitted for shoes,” he recommends. “We have a great one here in Burbank, Fleet Feet on Magnolia. I use it all the time. In Glendale, there’s A Runner’s Circle.”

How to Choose an Athletic Shoe

Kase recommends sports-specific shoes: “You shouldn’t play tennis or do aerobic dancing in a running shoe.” That’s because those are lateral-motion activities and running is a forward-movement sport. But when it comes to walking and hiking on mild terrain, running shoes are best, he says.

Watch What You Run on and in Which Direction

The worst surface to walk and run on is concrete. “All the shock that’s transmitted when the foot makes contact with the ground goes up the leg,” Kase says. Asphalt, which is street pavement, and other surfaces such as grass and dirt have more yield and absorb more shock. But if you run on grass and have a tendency toward unstable ankles, he adds, be aware that you could injure them.

Kase recommends a hard dirt surface for running. However, if you’re doing long distances on a running track, you may want to “reverse the way you go every two laps to avoid injury.” That’s because if you keep running counterclockwise, you’re “creating a functioning leg-length differential and you’re putting more stress on your back, your hip and your knee, foot and ankle. If you’re going in a counterclockwise direction, your body is leaning, kind of twisting toward the inside,” he says. “You’re internally rotating your right side and externally rotating your left side.”

The Two Ankle and Lower-Leg Injuries Kase Sees Most Often

Ready to put these exercise safety tips to use? Check out “Fit for the New Year” for an overview of fun workout options in and around our neighborhood.

Franklin Kase: Taking It on the Run 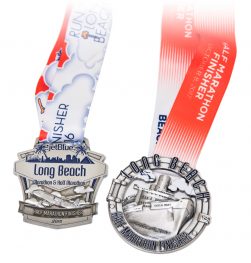 Favorite marathon site: Long Beach, because the course is along the water.

Scary moment: Kase has been hit from behind, by a bicycle. He suffered minor scrapes and it’s why he now runs against traffic.

Why he started running: “I’ve always been an athlete,” he says. Plus, “when people know I’m a runner, a marathon runner, I have much more credibility in the world. I see more sports injuries than probably the majority of podiatrists everywhere.”

Credentials: Double board certified in foot and ankle surgery and foot and ankle medicine. Fellow of the American Academy of Podiatric Sports Medicine, chair of health policy for the California Podiatric Medical Association, fellow of American Professional Wound Care Association, fellow at American College of Foot and Ankle Surgeons and American College of Foot and Ankle Orthopedics and Medicine.