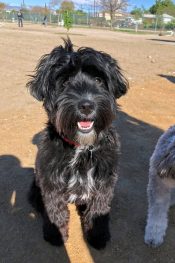 Found under a bridge in Bakersfield, Little Bear is delighted to now call Toluca Lake home. He is known as “Mr. Riverside” due to his congenial nature and daily strolls along the boulevard. A regular at The Coffee Bean and Kreation, he enjoys sniffing out sweet bunches of flowers from Trader Joe’s and greeting patrons on the patio at Patys. He recently celebrated his first birthday and reunited with his siblings, all of whom were adopted through Mutt Shack, a local nonprofit puppy rescue. Little Bear is so mixed he’s often mistaken for a designer breed — his DNA test revealed more than seven distinct breeds, making this pup truly one of a kind.