When my husband and I moved into our Toluca Lake apartment, the words of our new landlady, Judy Coates, caught me off guard almost as much as her galactic cats fanny pack did: “I want you to be neighbors.”

I quickly learned her reasoning — she lived next door and could see into our dining room from her kitchen window.

Our frequent interactions with Judy were unlike any other tenant–landlord relationship I’d experienced or heard of. She was a fixture of our little slice of Cahuenga Boulevard for more than 40 years, and the reason we found ourselves in our neighbor India Dupré’s apartment for a mini-memorial this past September after we learned Judy had died.

There, we laughed, cried and swapped stories. From my neighbors, I learned Judy was a world champion trampolinist, and you could look over and see her bouncing past her roofline when her health was better.

Others shared how she’d let late rent slide when they were having a bad month, and how her hunt for tenants sometimes involved going to lunch with prospective renters to give them a chance when things like student loan debt had ruined their credit.

At the end of the gathering, Dupré made an announcement: Arianna Boldish, Judy’s friend and her cats’ caretaker, had a month to help Judy’s 17 cats find new homes, and we needed to help her.

“Judy’s main wish was her cats — her cats were her children,” Dupré says. “She and Arianna were partners in taking care of cats…. Their passion and their joy was helping cats and finding cats and rescuing cats, and everything was about cats.” 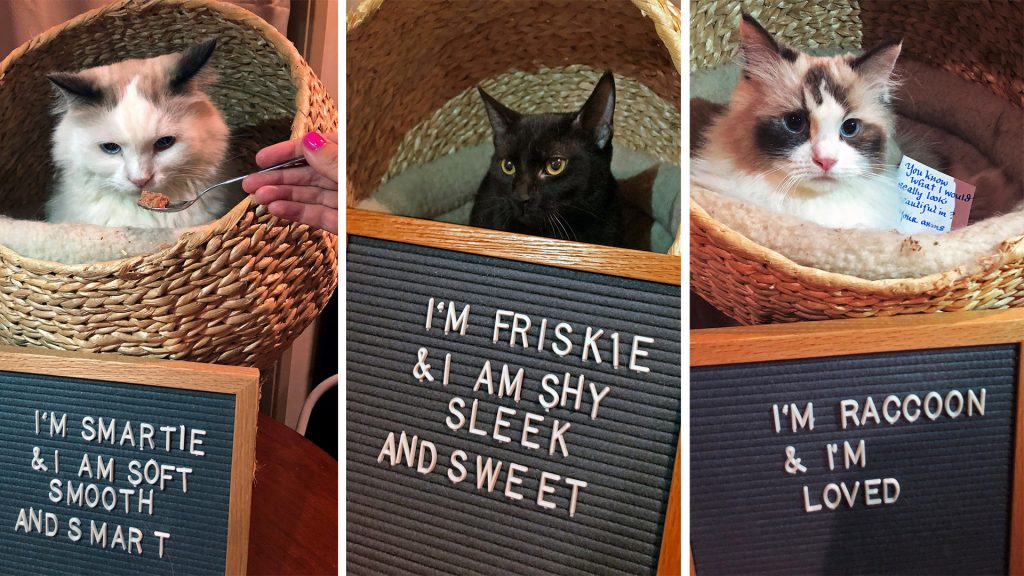 A couple days later, we received a late-night, panicked message from Boldish saying she now had a week to find new homes for the cats, or they would be taken to the pound.

While we’d initially planned a well-staged cat photo shoot using ideas we found on Pinterest, with the new deadline, that careful planning went out the window. Joined by another neighbor, Pauline Dawson, Dupré and I walked over to Judy’s house that night — in our pajamas — to take photos of the cats and comfort Boldish. We knew time wasn’t on our side.

“It was madness. We had this handwritten piece of paper with the names of the cats that we used as a checklist and Arianna was a mess…. She just lost her best friend,” Dupré says. “We would have to grab her and say, ‘What’s the name of this cat?’ and she’d look at it, and in a second she’d say, ‘Oh, that’s Balius.’” 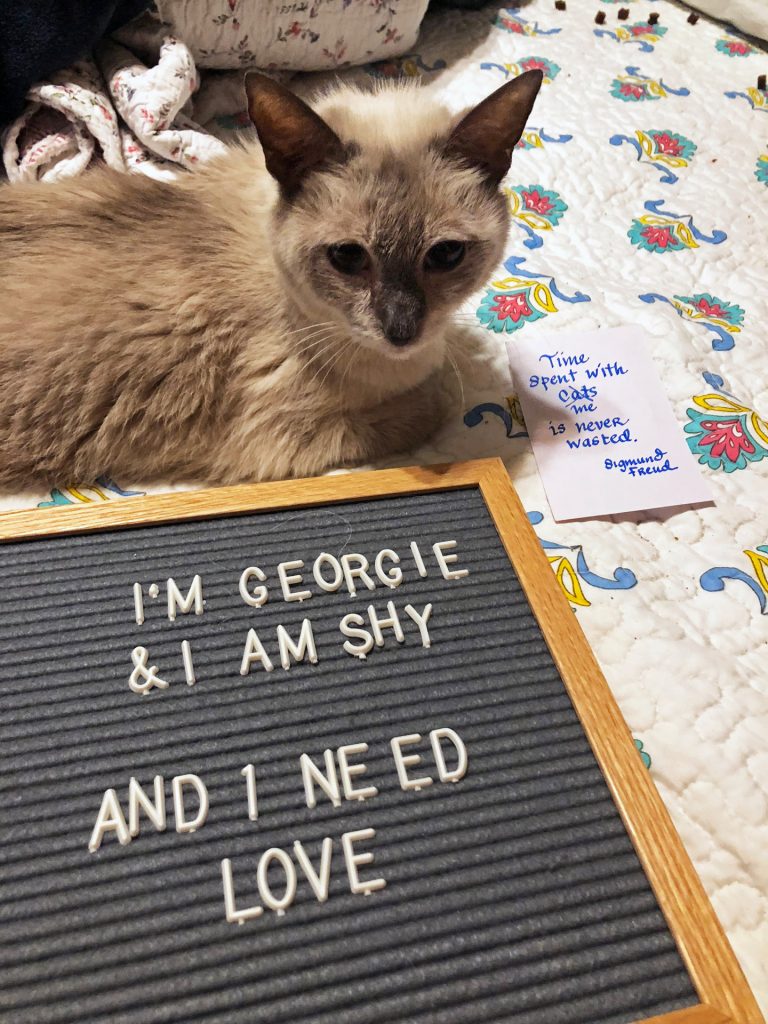 We quickly got to know the cats, too. While many of them had sweet temperaments, Georgie 2, a cat who’d never recovered from a broken pelvis, broke our hearts. He was sweet and silent, unlike Georgie 1. He had taken Judy’s death hard — he’d stopped eating.

Dawson posted the photos to Nextdoor, and I posted them to Facebook, where they were shared more than 600 times that week.

Those notifications turned into people wanting to meet the cats at all hours, which meant my neighbors and I were in contact like never before. Someone interested in a cat would reach out and we’d text one another to see if one of us could meet them, and that was usually Dawson.

“My world revolved around cats…. I would get messages and I didn’t know where they were coming from,” Dawson says. “It was just so exciting because every time a new text came, it was almost immediately that they adopted a cat…. There was never a moment where someone saw the cat and didn’t want to help or adopt one.”

We’d taken the pictures Saturday night, and by Monday we’d adopted out nine cats. Dupré gleefully checked off their names on the spreadsheet I’d made to organize our leads. We celebrated with a quick Sharky’s dinner in our communal outdoor space before Dawson met a UCLA law student who adopted Raccoon, a ragdoll who’d become a favorite of ours.

A couple hours later, I received an update saying, “I adopted Raccoon today and I love him so much already … know that he’ll be loved and cared for for the rest of his life.”

I posted the note to the feed, and updates started coming in from the others.

“When people sent in their videos of them in these beautiful homes, all loved and receiving so much attention, all of our hearts melted and we were so happy — the best part of all of it was seeing them in their new homes,” Dupré says.

Each day more cats went to new homes, and a woman named Deborah Corday connected with Georgie 2. Her only concern was Georgie’s health — she didn’t want to put her cat through grief again after having just lost its companion.

When it became clear Georgie 2 wasn’t getting better, my colleague Kathy Lovin, a dedicated cat rescuer, volunteered to take him to the doctor. The tests were inconclusive, and Georgie had yet to eat.

Still, Corday was interested, so I connected her with Lovin, and the pair tried everything possible to help Georgie.

As this was going on, Nessy, the final cat at Judy’s, was adopted. She was painfully shy, needing to be surrounded on three sides at all times. We were thrilled she found a patient home, but with Georgie 2 in limbo, things were far from over.

After a few glimmers of hope, Georgie took a sharp decline, and Lovin and Corday decided it was best to euthanize him so he’d no longer be in pain. Corday arranged for her vet to come to Lovin’s house for the final procedure. The women held his head and kept his body comfortable. Afterward, they held up Judy’s tiny sweatshirt Georgie had slept on and talked about who she was. They’d never met her, but they shared her stories.

The pet crematorium sent a candle to remember Georgie, and we added it to the memorial our neighbors put together to honor Judy. We still think about her, and how she brought us together.

“I know Judy’s happy because the main thing she wanted was for her cats be happy,” Dawson says. “And it looks like, from the videos and the pictures, all the cats went to great homes and are taken care of with the most love possible.”

Hillary Jackson is a writer living in Toluca Lake whose words have appeared in the Washington Post, Architectural Digest and The Week, among other outlets. When she’s not working, you can find her walking her West Highland terrier, Nessie, or riding bikes with her husband around the neighborhood — sometimes with Nessie in tow.