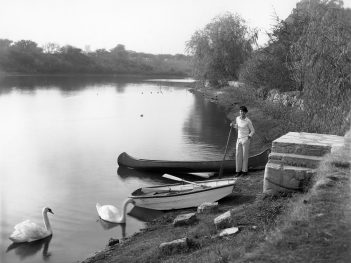 LAKE-LOVER Actor Charles Farrell enjoying the lake near his home in 1928, accompanied by one of the swans he was reputedly responsible for introducing to the area. Best known for romancing Janet Gaynor in silent films like 7th Heaven and Street Angel, after becoming one of the early homebuilders in Toluca Lake he would become a major player in the developing prosperity of Palm Springs in the 1930s. Photo courtesy of Bison Archives.