For local history fans, there’s nothing more intriguing than seeing an old photo of a place you know well. Sometimes the intervening years have brought a total transformation, but occasionally you can see the specter of today’s landscape showing through, reminding you that some things don’t change. In the 1954 photo of Bob’s Big Boy above, for instance, the cars and clothes may be different, but the “Original Double Deck Hamburger” neon script and similar scenes of locals gathering for good food on a pleasant evening can still be seen on Riverside Drive 65 years later.

Here, we’ve collected some of our favorite images of the area from days gone by. Whether they spark memories from your own past or show you a world you’ve never seen, we think they all evoke that familiar Toluca Lake feeling of timeless neighborhood traditions.

Many local families loved eating at the Tick Tock Toluca on Riverside Drive in the 1950s and ’60s (including Bob and Dolores Hope and their children, who reportedly dined there on Thursdays), with its famous orange and cinnamon “gooey rolls” and fun décor featuring, appropriately, plenty of antique clocks. The back of this postcard promised, “Home cooked food served in a ‘Homey’ atmosphere. A truly ‘Different’ place. Recommended by Duncan Hines in Adventures in Good Eating.”

By 1938, Toluca Lake was already well-known enough to be featured by name in Three Men in a Tub, the 164th short film in Hal Roach’s famous “Our Gang” series, in which Spanky and Alfalfa challenge Waldo in a “boat-race for champeenship of Toluca Lake” to win the affections of Darla. While often cited as a glimpse of Toluca Lake in its more rural days, it’s likely the scene was actually filmed at Malibu Lake, near the Paramount Ranch. Still, it remains widely remembered as one of the rare mentions of the neighborhood in popular culture.

The corner where Lankershim, Cahuenga and Ventura boulevards meet was beginning to look like a bustling thoroughfare in 1944, as wartime industry brought an explosion of new residents to the formerly rural area.

THANKS FOR THE MEMORIES

Dolores and Bob Hope in their Toluca Lake dream house in 1949, 10 years after it was built for them by architect Robert Finkelhor. The famous comedian’s name became nearly synonymous with Toluca Lake in the course of the decades he lived there, and many residents remember seeing the Hopes handing out silver dollars on Halloween or stopping by Bob’s Big Boy for burgers and malts. 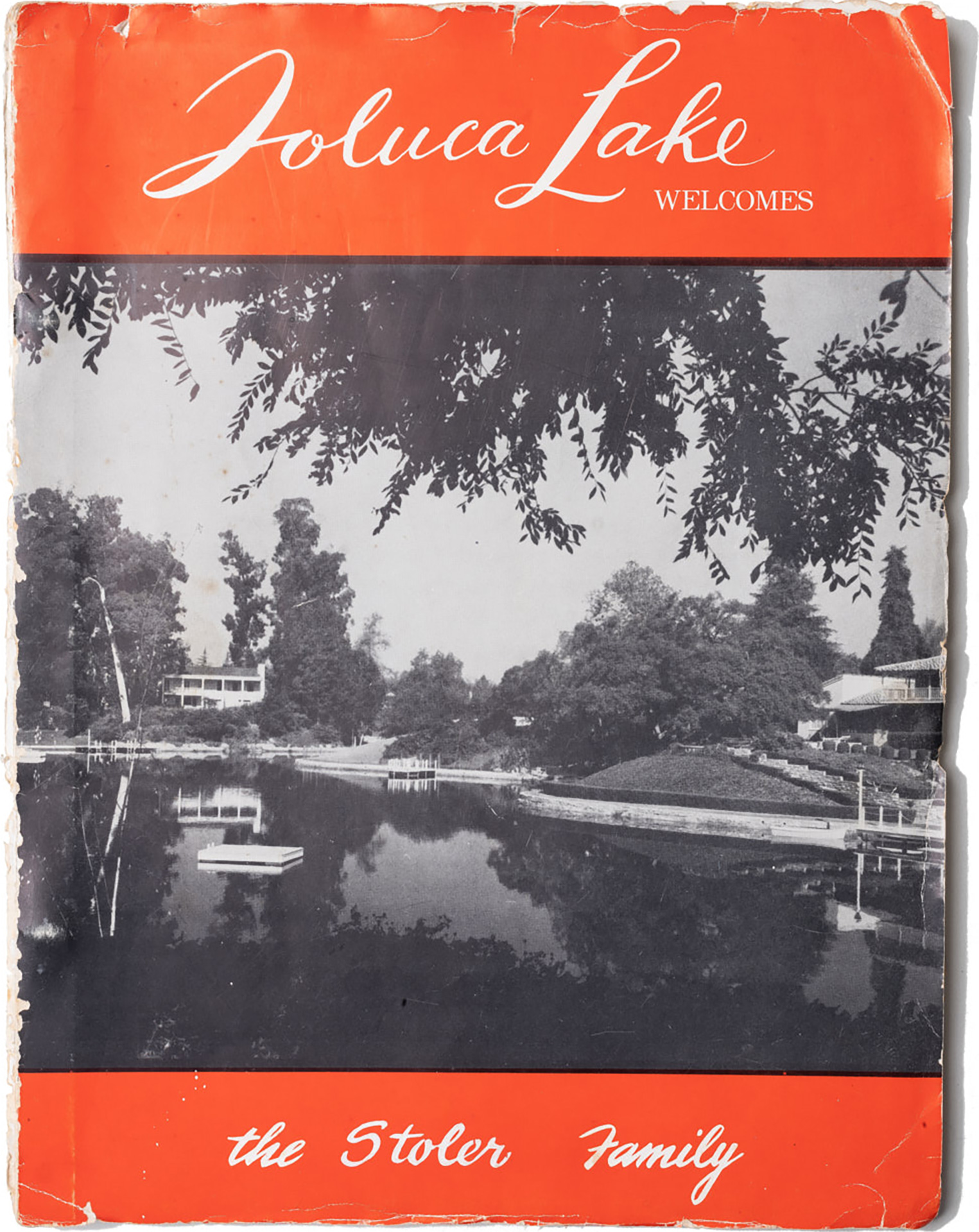 WELCOME TO THE NEIGHBORHOOD

This welcoming booklet given to new residents by the Toluca Lake Civic Association is a perfectly preserved snapshot of the neighborhood in the mid-1960s. Bound in a personalized cover, typewritten pages on vintage stationery provide lists of addresses for nearby churches, schools and other important places, as well as messages and special offers from bygone local businesses, including Lakeside Pharmacy, Alfonse’s Restaurant, Toluca Den, Albert of Toluca Lake (“professional hair styling and permanent waving”), Maurie Luxford’s Sportsman’s Shop and Lammersen’s Pop’n Cork.
“We trust you will not for long feel as in a strange place,” the introductory letter reads. “No one in Toluca Lake wishes you the feeling of strangeness — Toluca Lake only recently celebrated its 25th anniversary, thus all of us remember when we, too, were newcomers… Toluca Lake welcomes you with a wish of good fortune, happy living — and good cheer.” 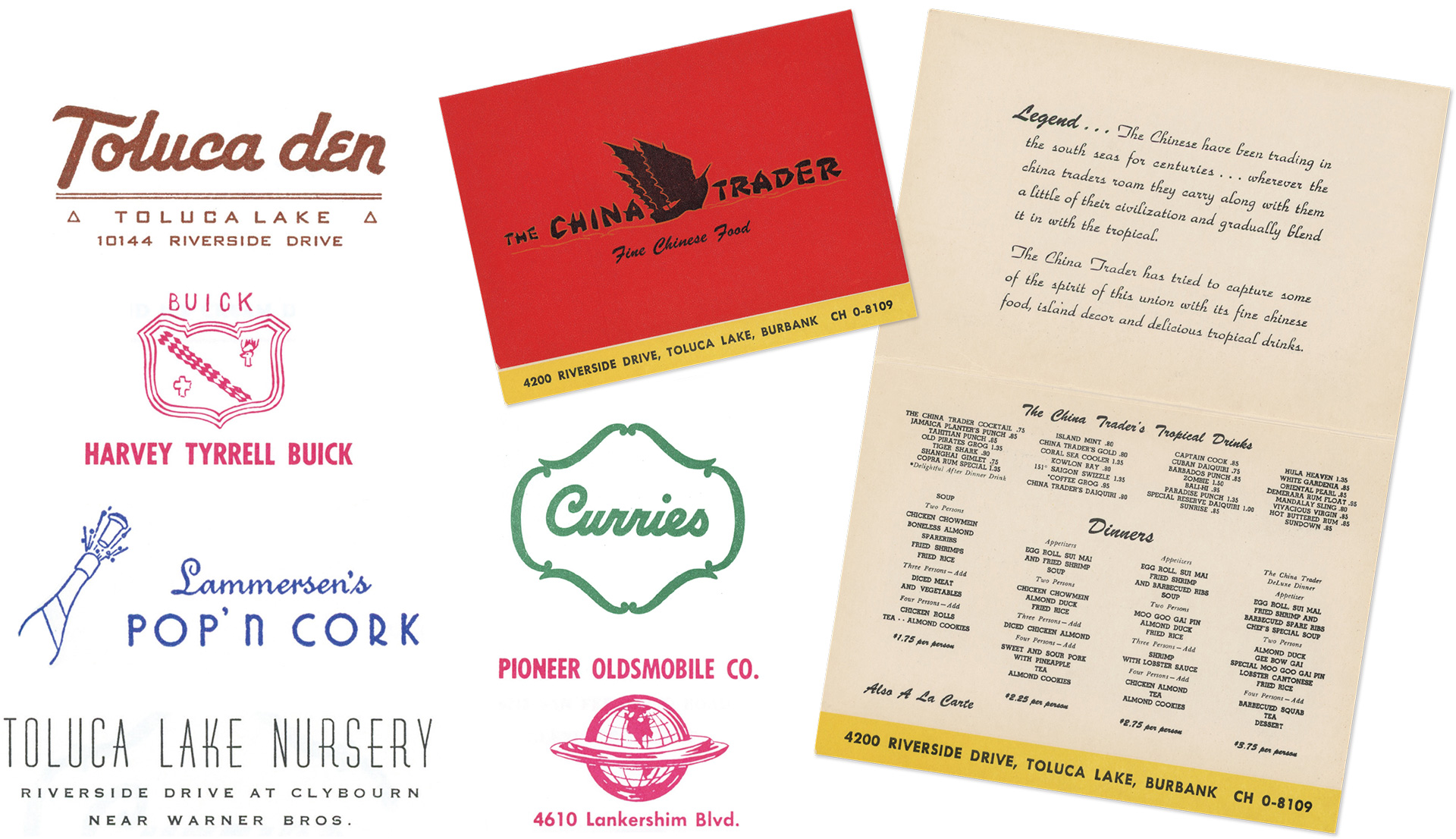 This photo of Barham Boulevard in 1932 shows the Warner Bros. lot dusted with real snow, not Hollywood illusion — and it wasn’t as uncommon a sight as you might expect. Flakes used to fall in the L.A. Basin about an average of once per decade between 1887 (when official records started being kept) and 1962, but now such events are rare. The January 1932 storm brought a record 2 inches of snow to downtown Los Angeles, made national headlines and inspired an epic 500-student snowball fight at Pasadena City College that spiraled out of control and had to be broken up by riot police with tear gas.

In 1969, Van and Helen Ohanian opened a jewelry store on Riverside Drive, on a site purchased from one of the Three Stooges. Fifty years later, their daughter and son-in-law, Sylvia and Peter Generales, operate the family business, now called Generales & Generales, in the same location.

Rock Hudson poses for a 1959 publicity photo at the Campo de Cahuenga, just down the street from his longtime studio home, Universal Pictures. Hudson lived in Studio City in the early 1950s (not far from his Pillow Talk costar, Toluca Lake resident Doris Day), and in 1953 he was chosen as Universal City’s honorary mayor (an honor Day would also receive in 1962).

Jenna Anderson is the managing editor for Toluca Lake Magazine.