“The club has been able to endure and thrive because many ladies wanted to be a part of it. As the years go by, our members get younger! It is so special because it is part of Toluca Lake, and after 75 years it is still going strong.”
— Rose Chimo, member since 1972

One of the original founders of the Toluca Lake Garden Club, Lillian Brummel, once reminisced that it started as simply a group of neighborhood ladies gathering for tea. However, they soon discovered their mutual love of gardening and their genuine concern for the condition of Riverside Drive. As they continued to meet, those shared passions grew until, in early 1947, under the leadership of president Dorothy Hamilton, the Toluca Lake Garden Club (TLGC) was born.

“I was very happy to be invited to be a member and to be with all of my crazy friends! We did as much as we possibly could to add more fun to life. The club is so special because it has wonderful, special people from Toluca Lake. I have watched it grow and grow.”
— Marion O’Mara, member since 1988

Through its association with other garden clubs, the TLGC became a member of the federation of California Garden Clubs, Inc. In July 1948, a meeting of local garden club presidents was held at Hamilton’s home to discuss “the need for a unified effort to make the San Fernando Valley a garden spot of which we can all be proud,” the Valley Times reported. As part of this collaboration, the San Fernando Valley Flower Show Association was established to encourage yearly floral competitions. Also in that year, the TLGC started a Junior Garden Club with the goal of teaching children the art of gardening by planting bulbs in containers.

“My earliest impressions were how sweet the elderly ladies were, and there was so much love and so much fun happening. The club has thrived because we are all Toluca Lake residents, and we take pride in the neighborhood and our gardens.”
— Nan Christian, member since 1997 and past president 2003–2004

The TLGC members were very active in sponsoring and competing in local flower shows. They also organized art shows and photo exhibits in Toluca Lake. These events, held at the old Coast Savings Bank (now the site of Burbank Advanced Imaging), were always well attended by the community, and several talented members were regular ribbon winners.

The club took on many garden-related projects, in keeping with their mission as described in the July 8, 1949, issue of Toluca Lake News: “to promote beautification in and to maintain and perpetuate the natural residential attractiveness of the Toluca Lake area and to aid in the protection of native plants and trees.” Starting in 1950, it became a tradition for the TLGC to create a wreath for the annual celebration of the 1847 signing of the Treaty of Cahuenga. Each year for several decades, a different member provided a handmade wreath.

“Not only did I learn about flowers, but I learned about friendship. The club gave me the feeling of having 30 sisters with common interests. Some of my favorite memories were having fun showing off the antics of the ‘Floridorias,’ a group of women of a certain age who at our meetings performed songs and dances all about flowers.”
— Judy Holliday, member since 1996 and past president 2002–2003

Most of the magnolia trees on the residential streets of Toluca Lake were planted by the TLGC in the early years under the leadership of president Penny Lent, and, happily, they are still thriving. The club went on to plant many more trees in Toluca Lake, replacing existing ones that failed to thrive or adding them where none existed. If residents wanted a tree planted in front of their home or on a deserted parkway, all they had to do was ask and it was done.

The TLGC didn’t just restrict its efforts to the immediate neighborhood. The club has contributed to the reforestation of the local Angeles Crest National Forest through yearly donations to the Penny Pines Foundation, funding the planting of more than 7,000 trees. This has become increasingly important as the California forests have suffered recent devastating fire losses. The club has also made annual donations to the Plumas National Forest in memory of late District 4 Councilmember Tom LaBonge.

“What I love most about our Garden Club is how the older members are respected and admired. Our 75-year history is due to having an incredible group of women that work together and share a common goal.”
— Robyn Allyn, member since 2010 and past president 2014–2017

There were a variety of other garden-related activities over the years. Every holiday season, artist and TLGC member June Broughton supplied all the makings for the VA Hospital Christmas tray favors, and it was the club’s job to make and deliver them as part of garden therapy. They also supplied the flowers for the VA chapel on a monthly basis. Closer to home, they made sure the landscaping at the base of the Toluca Lake Chamber sign located on Riverside Drive was planted, maintained and watered properly.

The club met on a monthly basis and boasted a lineup of amazing guest and member speakers, covering varied topics such as “Gladiola Hybrid Cultures,” “Flower Arranging and Christmas Decorations,” “How to Have Year-Round Colorful Gardens in Toluca Lake,” “The Art of Butterfly Gardening,” “The Art of Composting,” “How to Fertilize Your Toluca Lake Garden,” “The Art of French Biodynamic Gardening as practiced by Alan Chadwick,” “Growing Peonies,” “The Care and Feeding of Roses” and “The Art of Grafting Camellias” — the latter of which was presented by Leosia Shirley-Wentink, a charter member who was active until the ripe age of 100.

“The Garden Club is more than a ‘club.’ It is a sisterhood. We are neighbors, we work together on community outreach projects and, most importantly, we are friends. I love knowing that I have 35 friends looking out for me, as I look out for them.”
— Shelley Zbornak, member since 2004

Several years ago, after the passing of honorary TLGC member and longtime treasurer Richard Duenckel, husband of past president Shirley Duenckel, a scholarship was named in his honor. The award is presented annually to a deserving botany student at California State University, Northridge, to assist in the advanced study of horticulture.

Over the club’s 75-year history, members enjoyed many memorable field trips to find inspiration in other L.A.-area gardens, including the Getty Museum, Robinson Gardens, the Japanese Garden, Busch Gardens, the Huntington, Descanso Gardens, the Pasadena Showcase House of Design and the Lake Shrine Retreat in Pacific Palisades. 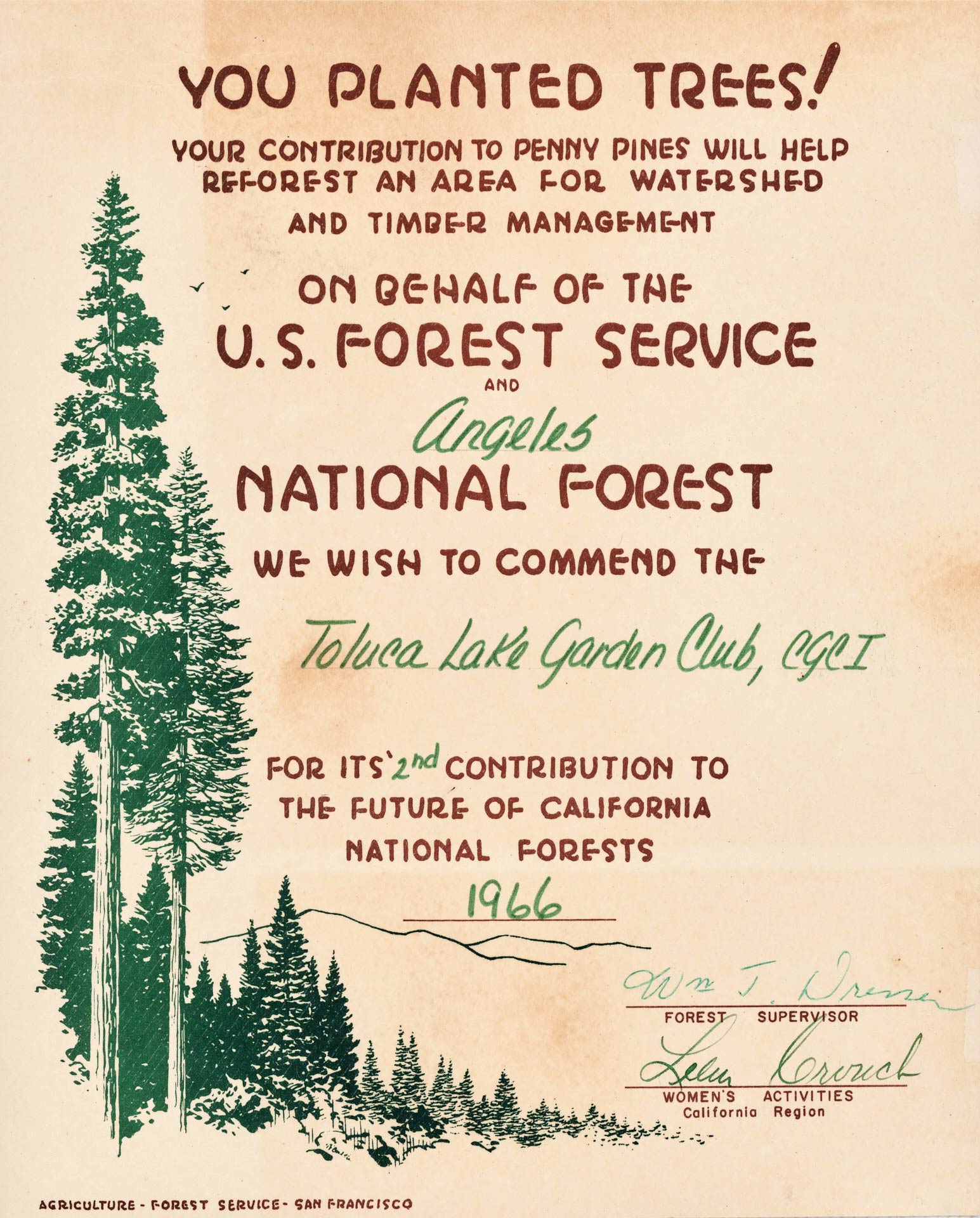 “One memory that stands out was creating our cookbook. Food brings people together, and this cookbook brought neighbors, businesses, multiple generations of Tolucan families and Garden Club members so much closer together.”
— Christy Noll, member since 2007

Following the TLGC’s long tradition of dedication to the community, today’s members continue to focus on local beautification, including the planting of 13 dwarf lemon trees in planters along Riverside Drive, which the club waters and maintains. Over the last two years, the Garden Club has also worked to instill a love of gardening in future generations by partnering with Toluca Lake Elementary School. Outreach chair Robyn Allyn created a fundraiser to collect all types of gardening-related books, including flower arranging, reference and children’s stories, to establish a section in the school’s library. In a donation dedication to the school in May 2021, the club presented principal Jeff Daniel and the new librarian, Maria Valenti, with more than 200 books. Part of the school’s playground has also been converted into a raised planter bed garden, where a ranger regularly teaches lessons on maintaining a garden. 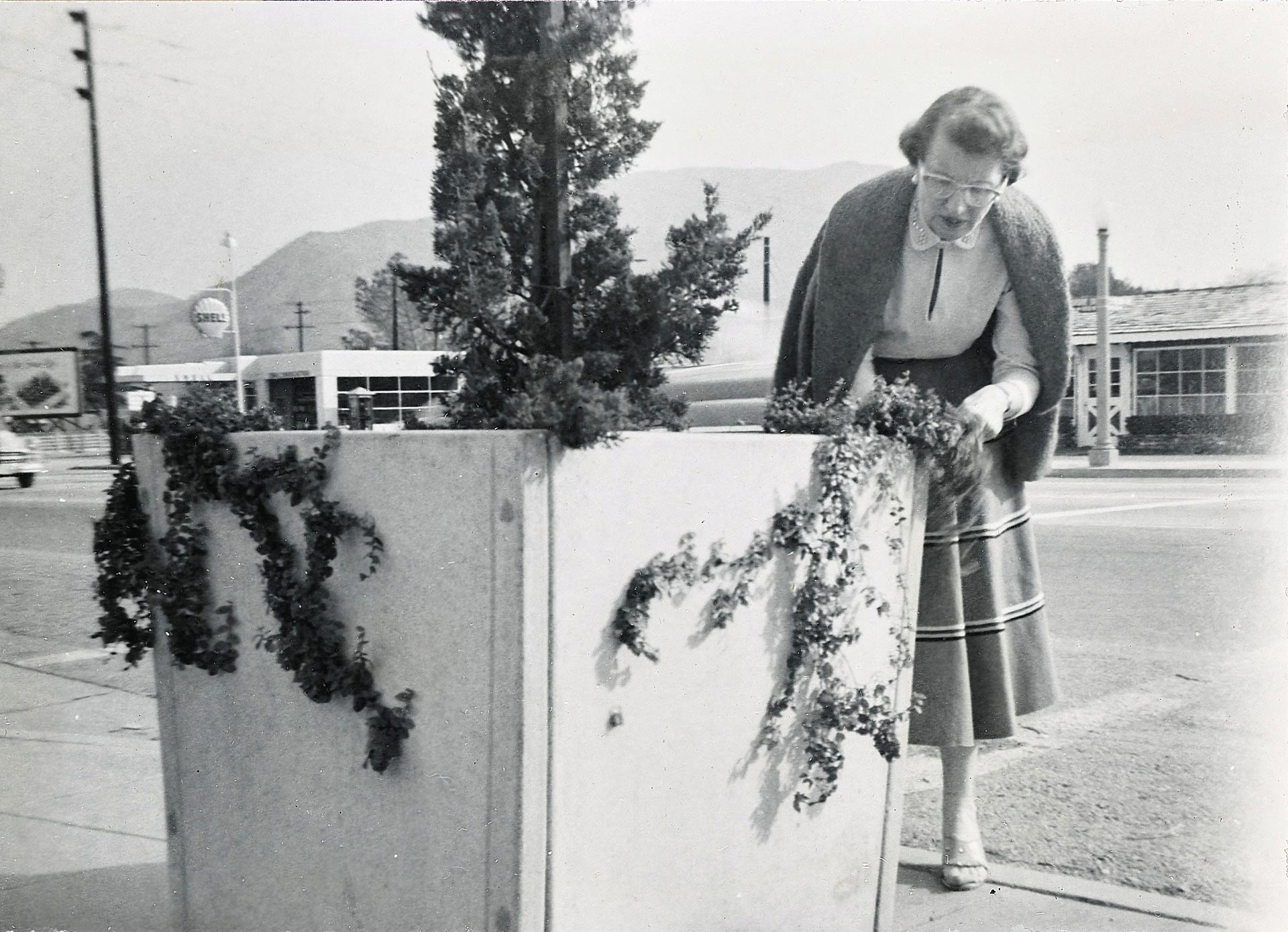 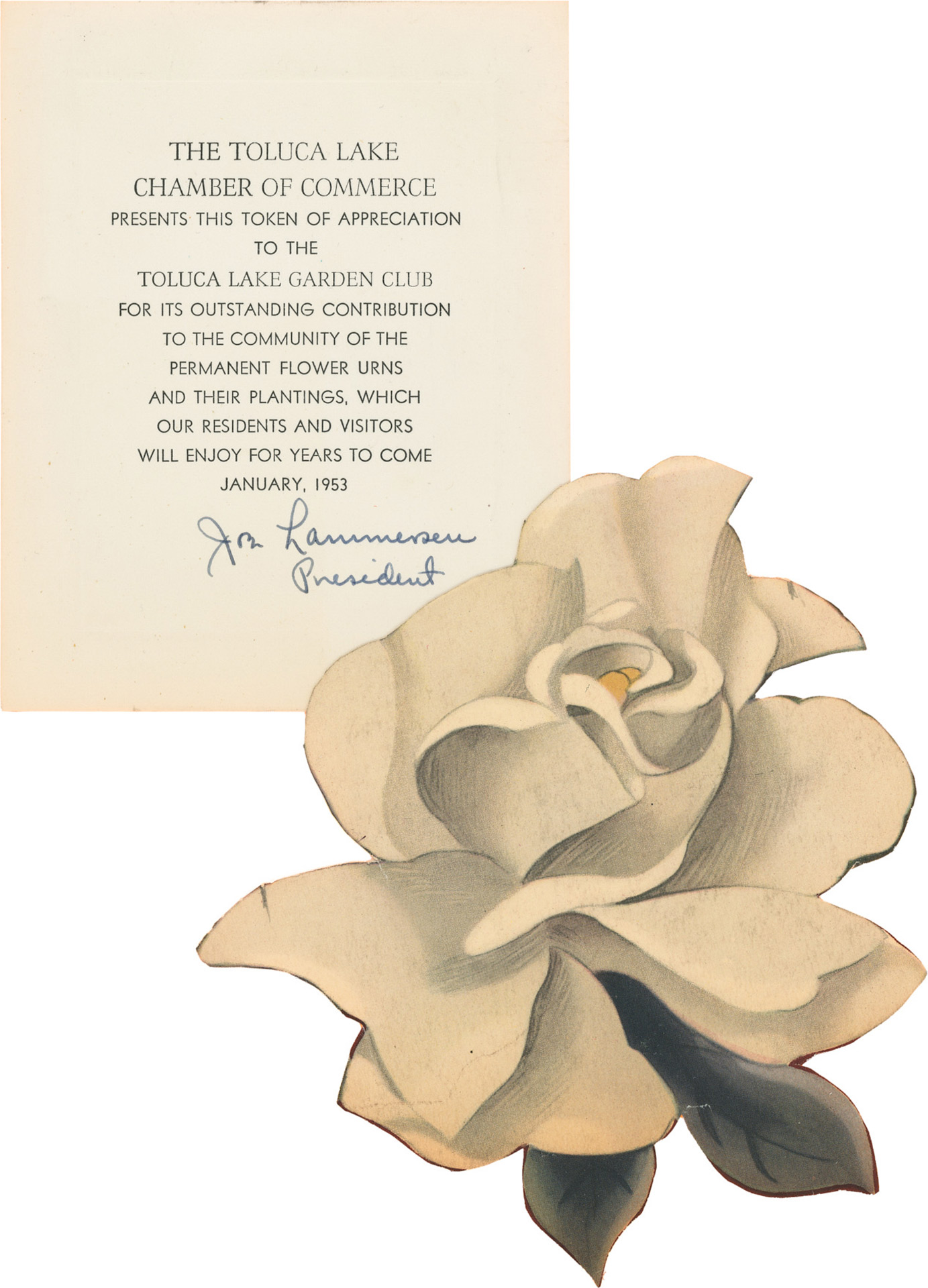 In addition, the TLGC applied for and received two generous grants, a Plant America Grant from the National Garden Clubs Inc. and a Neighborhood Purpose Grant from the Greater Toluca Lake Neighborhood Council. Together with the school’s PTA, parents and students, the club added plantings funded by these two grants in front of the school along Cahuenga Boulevard to help beautify its entrance. Involvement with the school supports the TLGC’s larger mission of encouraging interest in gardening, helping to develop better horticulture practices throughout Toluca Lake and inspiring California native plant home gardening.

“My favorite memories are of our holiday luncheons — everyone dresses up beautifully and brings a brand-new toy to be donated, and we take pictures, sing songs and spend quality time together. My grandmother always told me to make sure I have friends of all ages, and because of the Garden Club, I do!”
— Kirith Prady, member since 2018

Of the many presidents who have guided the TLGC throughout its long history, eight are still with the group. Shirley Duenckel held the office for 12 years, and her kind and graceful leadership built the club membership to what it is today. Current president Leslie Gores has led the club through the global pandemic via Zoom meetings, and has continued to find ways to give back to the community.

The Garden Club has left its mark on Toluca Lake over the last 75 years, partnering with local organizations and businesses to take the lead on neighborhood beautification, cleanups and planting. As the community continues to embrace our work, we hope to flourish for many years to come.

About Natalie Bloxham and Tippi Pyle

Natalie Bloxham and Tippi Pyle are past presidents and longtime members of the Toluca Lake Garden Club.