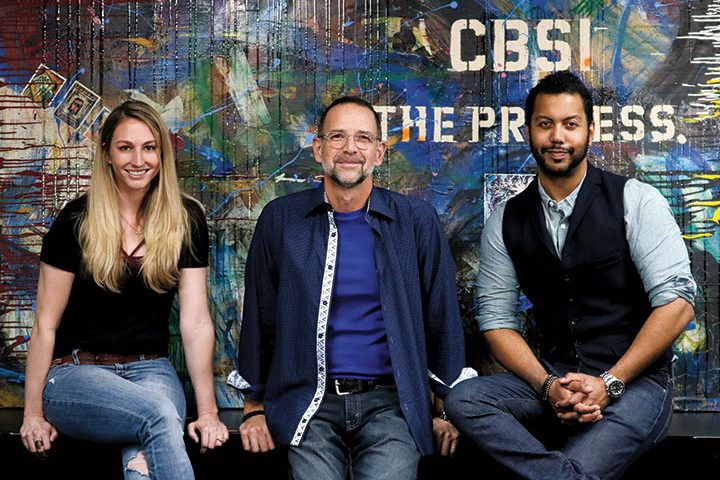 On Riverside Drive, situated comfortably above The Perfect Parrot and just down the walkway from Strong Body Pilates, is a hidden gem of an acting studio: Clay Banks Productions & Studio International (CBSI). With Coach Clay Banks himself at the helm, CBSI is an established on-camera acting studio and independent production company. The studio has been a place for aspiring actors, as well as Emmy nominees and winners, to train with the best of the best since 2000. And, after 19 years in the surrounding areas, CBSI has just now found a new home in the heart of Toluca Lake.

At CBSI, Master Coach Clay Banks teaches a powerful Meisner-based on-camera film acting technique that’s strongly grounded in the art and technicalities of working honestly and truthfully, moment to moment – specifically for professional work in Film & TV. CBSI is a high tech studio featuring multiple HD cameras, monitors and a Split-Screen-ECU process. During scene work, students are filmed with close-ups displayed on a split-big-screen. This allows the coaches to better train students to develop strong technical skills and physical discipline that makes them powerful on screen, all while learning to connect outside of themselves. These scenes are recorded, which allows students to take their captured scene work home after each class so they can objectively review their work along with the coach’s notes. And for teens, it also allows parents to view what’s going on. “The camera doesn’t lie,” says Coach Banks. “Training on camera with a coach and watching your playbacks is the most effective way to approach your artistic training objectively.”

But CBSI is more than just an acting studio. It’s also a life empowerment center for advanced artistic studies. Coach Banks has extensive experience with life coaching from his time working as a National Instructor, Business Coach & Motivational Speaker with a New York-based Fortune 500 Company. His decade-long run provided him with opportunities to develop advanced coaching, mentoring, and communication skills while furthering his knowledge of people, human behavior, social structure, and life overall. These are not only core ingredients to effective storytelling, but also key empowerment principles for any professional looking to take things to the next level.

Originally a native New Yorker, Clay eventually made his way to Los Angeles, where he shifted his focus from the corporate business world back to his original passion since childhood — the arts! Over the following two decades, Clay has enjoyed an 18 year acting career and gone on to coach and direct thousands of other actors, including (as previously mentioned) Emmy nominees and winners! He’s written, produced and directed countless shows, and eventually became the Improv Director and Comedy Coach at The World Famous Comedy Store on Sunset Blvd. where he graced the stage alongside some of the Who’s Line Is It Anyway gang! During that time, Clay landed the recurring role of Lt. Richardson as a series regular on the high-concept action TV show “LA Heat”. He’s also worked in movies, on stage, and appeared in upwards of 100 TV commercials.

Clay is presently a recurring Master Coach at SAG-AFTRA Headquarters, a guest Master Class Auditioning Coach with the American Academy of Dramatic Arts, Hollywood, and writes acting and industry related articles for Backstage as a Field Expert.

With decades of experience behind him, Clay created CBSI, a place which allows him to combine his passion for coaching and the arts. He not only understands both sides of the camera first-hand, but he has an amazing gift to inspire, motivate and bring out the greatness in others. He possesses a unique talent for understanding where people are and how to get them out of their own heads and onward to where they’re going. Clay’s coaching staff is extremely unique, as it has been hand selected and cultivated under his watchful and mentoring eye. If you spend any amount of time at CBSI, you’re sure to leave changed for the better. So if you haven’t yet been to CBSI for one of their training/empowerment sessions, do it soon! You’re sure to leave a more knowledgeable and empowered individual!

Presently, CBSI has seats available for mature teens and adults who are serious about developing and/or improving their craft. Audits are permitted. For more information on Classes, Private Coaching (in-person or skype), Self-Tape Auditions, Audits and Workshops, please visit ClayBanksStudio.com.