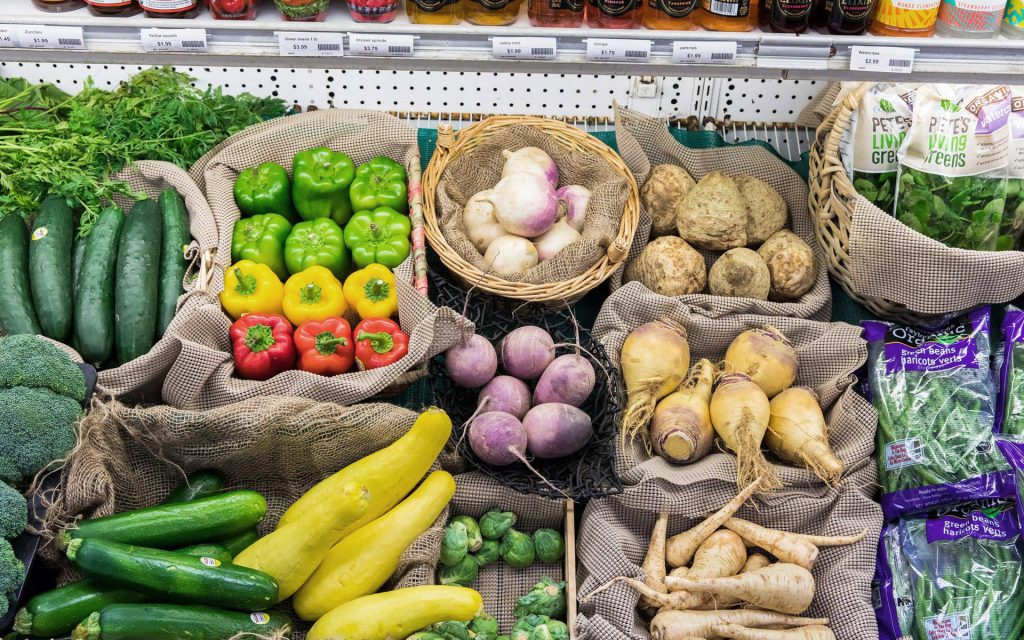 For the past 58 years, local health food market and restaurant Full O’ Life has remained dedicated to its mission of bringing organic produce and natural food products to the community. General manager Cindy Moon carries on the tradition set forth by her parents, Kay and Edward “Barney” Matheson, who founded the market in 1959. Having begun working alongside her parents and sister at the store after school at age 12, Cindy has seen the market grow and respond to health food trends over time. Now, as general manager, Cindy works alongside her husband, Gary Moon, their son and grocery manager, Chris Moon, and a dedicated staff to keep the market fresh and relevant among the myriad organic health food stores that have appeared in the neighborhood in recent years. “Still being here is an accomplishment,” says Cindy, of the market, which always works on fine-tuning its offerings to match diverse diets in the community.

Given the family’s experience running Full O’ Life, they have become local experts on green eating and living. In addition to sharing Full O’ Life’s history in our March/April issue, the Moons offered some insight on health food trends and more details about what makes their market and restaurant unique.

The Case for Going Local

Eating locally and with the season is a synergistic approach to green eating and living, Chris says. “Every part of the world has its own super fruits, and there’s a reason for that. When you live in a certain area where stuff grows naturally, that should be the stuff that you’re eating,” he says, noting the reciprocal relationship between people and the planet. For example, “if you use honey from the region, you’re not going to have as many allergies” because you’re ingesting local pollen,” he says. Staying local also is good for the environment: It cuts down on transportation and fuel costs and reduces pollution.

A big part of Chris’ job as grocery manager is looking out for consumers. “You really want people to not have to worry about picking up the product and looking at the ingredients and being concerned about something bad being in there,” he says. “People don’t buy ‘fake’ stuff anymore. They want full fat because that’s how we should be eating.” He’s seen a spike in people eating real butter, raw milk and bone broth, all foods made with the fewest ingredients possible. He’s also noticed people staying away from certain oils, like canola oil, which is produced from 80% genetically modified plants, and cow’s milk, which is being passed up for protein-packed almond, cashew and coconut milks. “People want functional foods,” he says, foods with health benefits that go beyond essential nutrients and are often fortified with other ingredients (e.g., raw chocolate infused with cordyceps mushrooms or kombucha can increase energy, boost the immune system and more).

As a result, many health-conscious companies gravitate toward a less-is-more approach, Chris observes. At the market, items like the popular vegan Beyond Burger are an indication of how companies have grown and adjusted their recipes to include quality ingredients such as organic beans and rice. Plus, Gary adds, the taste of vegan and paleo food has improved so much that nonvegans are enjoying and picking up plant-based foods at the restaurant and market.

Of course, not all trends are a hit. “I’ve seen stuff where you think it’s going to be big, but doesn’t quite pan out,” Chris says. “Like, everyone loved Sriracha, but Sriracha-flavored items, like mayo and chips, didn’t really sell.”

When it comes to serving up healthy fare, the restaurant at Full O’ Life doesn’t just limit itself to salads. Instead, the chefs craft creative menus filled with unexpected healthy meals — like tostadas, enchiladas and tacos. “Our Mexican food is better than any Mexican restaurant in this area,” says Cindy, who challenges peoples’ perceptions of what’s healthy with a surprising menu. “When you think of healthy and organic, the last thing you would think of is tacos and burgers,” she says, but the restaurant serves that and more with a focus on freshness. “All the items available on the menu are made from the very same organic ingredients found in the market — we make great, quality food that tastes really good.”

“Nature’s not hard to deal with,” says Gary. “I grew up on a farm in the Midwest, so I know about going green.” People who want to transition to a green lifestyle should start by making gradual changes to their daily habits, he recommends. “You have to [develop] a certain palate for it, but it’s not that long after trying it [that you start to get a feel for it],” he says. “It’s all about gaining experience. Over time, you can learn to enjoy organic foods and composting.”

The Moon family makes an effort to instill environmentally friendly practices into Full O’ Life. For instance, the restaurant plays a huge part in helping the market reduce waste. “That’s what’s really nice about having a café, when you’re ordering stuff, you’re ordering stuff from the store and the café [and] it gets used on both ends. It works out really nice,” Chris says.

If items can’t be repurposed, they are composted. “We never just throw things in the trash,” Gary says. To further reduce waste, Cindy adds, the restaurant uses compostable items, like utensils, cups and take-out containers.

Another example is the building itself. “We’re always learning new ways of being eco-friendly,” says Chris. “The City of Burbank came and switched out our compressors [in] our refrigerators; they came in and offered [those services] for free.” For more about these services, visit dev6.burbankwaterandpower.com.

For more on the market and restaurant’s history, check out “Full O’ Life’s Legacy of Green Eating.”