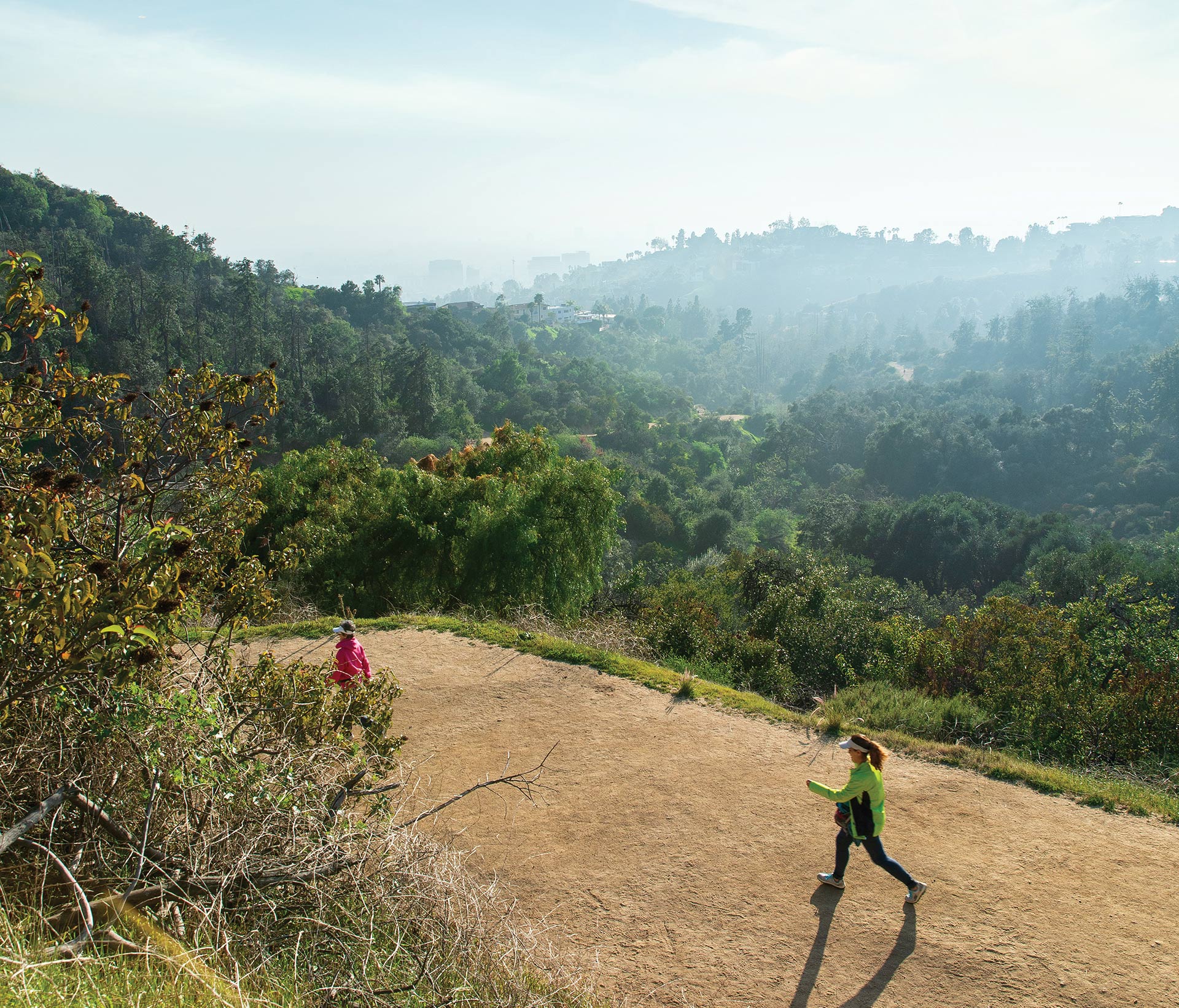 You don’t have to venture very far to experience the great outdoors — especially when you live a stone’s throw from some of the best hiking in the city. From the scenic yet rugged Verdugo Mountains to Griffith Park’s extensive 53-mile trail network and the revitalized greenways along the L.A. River, adventure can literally be found all around us. And now that spring is here, there’s no better time to lace up your hiking shoes and explore nature in full bloom. Whether you’re into steep summit climbs or leisurely walks, there’s a local hike out there waiting for you.

Ferndell Nature Museum to Griffith Observatory
Distance: 1/2 mile–~2.5-mile loop
Difficulty: Easy/moderate
No hike to Griffith Observatory is complete without a jaunt through the Ferndell Nature Museum. But you won’t find any buildings or interpretive messaging here — this “museum” is composed of the rich assortment of flora and fauna living in the tree-shaded oasis in Griffith Park. Under a canopy of oak, sycamore, pine and redwood trees, hikers meander along a pathway bordered by an expansive variety of native and non-native plants, such as ferns originating from Africa, South America and Australia, and animals like prosperity clams, red-eared slider turtles and large koi. The trail conveniently connects to the West and East Observatory trails, which lead to Griffith Observatory.

Bronson Caves
Distance: ~0.6 miles out and back
Difficulty: Easy
In the southwestern portion of Griffith Park lies Bronson Canyon, home to the Bronson Caves — a popular sci-fi and western filming location made famous by the ’60s Batman TV series. While the hike to the entrance of the Batcave has become a mecca for Caped Crusader fans young and old, you don’t have to be one to appreciate the short but fun excursion to a cool piece of Hollywood history. To get to the trailhead, head north up Bronson Avenue, off Franklin Avenue, until it curves into Canyon Drive and ends at a dirt trail and parking lot. As you pass through the caves, you’ll be greeted with one of the best views of the Hollywood sign on the other side.

The Wisdom Tree
Distance: ~1.6 miles out and back
Difficulty: Moderate/hard
The Wisdom Tree perched atop Burbank Peak is an iconic sight and powerful symbol for people across L.A. Over the years, the lone pine has come to embody, among other things, perseverance and hope — especially after it was the only tree to survive the 2007 fire that burned 160 acres of the Hollywood Hills. To get to the trailhead of this inspiring L.A. landmark, park on Lake Hollywood Drive and make your way down Wonder View Drive. The brief, rugged climb to the tree is rough, but the views make it worthwhile. At the top, you’ll get a sweeping view of the Valley, including scenic Toluca Lake.

The Hollywood Sign
Distance: ~3 miles out and back
Difficulty: Moderate/hard
If you made it to the Wisdom Tree, consider extending your hike a bit farther to visit another famous landmark: the Hollywood sign. Head east to the Aileen Getty Ridge Trail toward Cahuenga Peak, which is the tallest in Griffith Park and has, according to many hikers, one of the best 360-degree views of L.A. and Burbank. After taking in the view, hike down to the portion of the trail connecting Cahuenga Peak to Mount Lee. Be sure to watch your footing, as the trail from peak to peak is a notoriously tough, narrow single track with loose gravel, sections of scrambling and steep areas. You’ll soon reach a paved road behind the fenced-off Hollywood sign that leads you to the Mount Lee summit.

Lake Hollywood Reservoir
Distance: ~3.4-mile loop
Difficulty: Easy
Sometimes seeing the Hollywood sign from afar is just as good as seeing it up close. Below Cahuenga Peak and Mount Lee is the Lake Hollywood Reservoir, which offers a great view of the sign without the climb, plus a peaceful trail along the perimeter of the Hollywood Hills’ hidden artificial lake. You’ll have to catch glimpses of the lake through chain-link fences, but there are plenty of other sights to see. The paved path is surrounded by oak, pine and sage trees and other native greenery, and deer, owls and waterfowl are known to frequent the area. The trail also features the historic Mulholland Dam, where you can get a view of the water and the Hollywood sign sans fence and marvel at the concrete dam structure built by architect William Mulholland in the 1920s.

Wildwood Canyon Park
Distance: ~2 miles out and back
Difficulty: Hard
Wildwood Canyon Park is the perfect place to get acquainted with the Verdugo Mountains, the scenic backdrop to Burbank and Glendale and a choice destination for hikers looking for a serious workout. The park offers a few ways to begin your ascent, but the Wildwood Canyon Trail, whose trailhead is closest to the park entrance on Harvard Road, is an optimal place to start. The short, steep hike is strenuous, but the views are gratifying, especially in the springtime when wildflowers blanket the mountain. The warm weather also ensures clear views of downtown Los Angeles, Burbank and more when you reach the top.

Stough Canyon
Distance: ~2.6-mile loop
Difficulty: Easy/moderate
For even more breathtaking vistas from the Verdugos, head to neighboring Stough Canyon and hike the Old Youth Camp Loop. Start at the trailhead near the Stough Canyon Nature Center. When you reach the junction half a mile in, take the left fork to start the trail. You’ll encounter “The View,” a popular lookout point with views of downtown Burbank and takeoffs and landings at Hollywood Burbank Airport. Afterward, make your way to a meadow filled with brush and California buckwheat; there, you’ll find remnants of a lodge house’s concrete foundation and tall brick chimney, along with secluded mountain views.

Runyon Canyon
Distance: ~1.9-mile–3.3-mile loop options
Difficulty: Easy/moderate
One of L.A.’s most popular hikes, Runyon Canyon features trails that take you up into the Hollywood Hills. However, if you’re looking for tranquility, this might not be the place for you; the park attracts a steady stream of people daily. But if people-watching is your thing, venture forth from the main entrance at the top of Fuller Avenue, located two blocks north of Hollywood Boulevard. Early on, you’ll encounter Inspiration Point and Clouds Rest, where you can take a breather and see grand views of Los Angeles. At about a mile in, there’s a junction where hikers can choose among 1.9-mile, 2.65-mile or 3.3-mile loops. Whatever path you take, you’ll be guaranteed panoramas of the city, a few celebrity sightings and dogs running up and down the trail.

Fryman Canyon
Distance: ~3-mile loop
Difficulty: Easy/moderate
If peace and quiet is more your thing, head to Fryman Canyon, an easier and less populated alternative to Runyon that has well-shaded paths, year-round springs and deeply wooded canyons. The Betty B. Dearing Mountain Trail, which begins at a parking lot at Fryman Road and Laurel Canyon Boulevard, passes through Wilacre Park, Franklin Canyon and Coldwater Canyon Park. The trail starts off paved, but gives way to a well-maintained dirt path punctuated by strategically placed benches offering views stretching from Burbank to Sherman Oaks. A side path leads to TreePeople’s Center for Community Forestry, where you can participate in educational tours, group hikes and more.

L.A. River Greenway
Over the past few years, the L.A. River Greenway project — which aims to create a continuous recreational greenway spanning 51 miles — has helped transform several blighted sections of the river into areas where people can walk, bike, ride horses, engage with public art, learn about ecology and explore surrounding communities. The Greenway offers an easy urban trail with multiple entries to parks and points of interest along the river, so hikers can create their own routes. For example, you can take a peaceful stroll along the North Valleyheart Riverwalk from Studio City to Sherman Oaks, and enjoy a pathway with native plants and California poppies and a large stone mosaic mural of a steelhead trout. Or venture farther north to the Sepulveda Basin Wildlife Reserve, a 225-acre site that’s home to over 200 bird species and hundreds of native and non-native plants and animals. If you’re in the mood for a day trip, make the trek from the Glendale Narrows Riverwalk to the Elysian Valley (aka Frogtown), home to trendy shops and hole-in-the-wall eateries, including its own brewery.