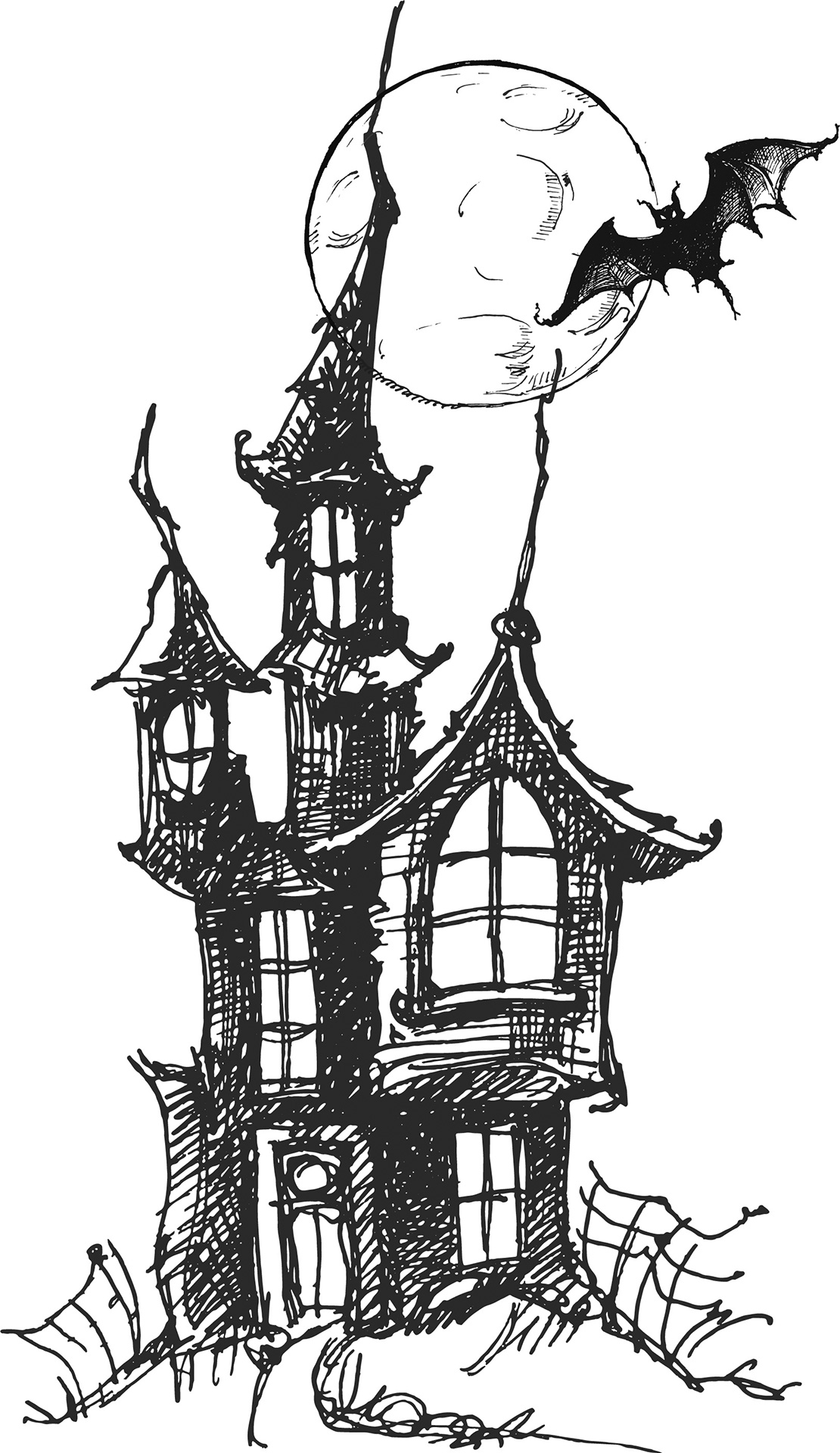 Enter freely … and of your own will. At the sound of these fateful words, the boys and I once again crossed the threshold of the scariest house in the world. Because of last year’s shame, our gang had taken a blood oath that this Halloween would be different; we would not go screaming into the night. But that remained to be seen.

The evening had begun as our Halloweens had for the last few years. Old enough to go haunting by ourselves, we were still in our western phase, so we all dressed in our best cowboy getup — except Butch, who had finally seen Robin Hood and, because of his size, decided he was a very tall, skinny Little John. So All Hallow’s Eve was going to be terrorized by a band of gunslingers, outlaws, cutthroats and one big kid in green tights, a faded green Pendleton shirt and his mother’s black leather belt around his waist. Butch, according to his brother Spike, looked more like Tinker Bell. Stuck in his belt was his great-grandfather’s Civil War officer’s sword. The scabbard made sparks on the sidewalk as we made a beeline to our first trick-or-treat destination.

Bob Hope’s house on Moorpark was always a great treat on Halloween. Stationed at the huge front gates was Harold, Hope’s houseman, standing guard over a large wooden keg filled with silver dollars, one per kid. Harold had known the neighborhood kids since many of us were born, and Hope’s daughter, Linda, was in our class at St. Charles, so there was no going to the back of the line for another dollar. Spike had tried the year before, and had come away with a red and twisted ear.

House by house, we made our way down the street, filling our paper bags or pillowcases. We were always polite — after all, some of the residents knew our parents. Several blocks later, we approached the house of our nemesis, cowboy star Don “Red” Barry. As in years past, he was ready for us. Red’s house was always dark on Halloween, just begging for a trick. We didn’t bother to ring the bell; we knew he wouldn’t answer. But we also knew that he was somewhere … waiting.

With a “Who elected me?” look on my face, I ran to the water faucet next to the front door and, as we always did, turned it on full blast. (Hey, it was Halloween!) The water started to flood the porch as I ran back to where the gang waited, cap guns drawn, just inside the picket fence. In a hangman’s second, every sprinkler on the property came on. All the sprinkler heads had cleverly been turned so they pointed toward the gate. Needless to say, there were a few wet desperadoes all trying to get through the gate at the same time — a real cowboy fire drill.

Red, fittingly dressed as the character he helped make famous in the 1940 Republic Pictures serial Adventures of Red Ryder, jumped out from behind the slate-gray ’47 Cadillac convertible parked in his darkened driveway, with his six-guns drawn. “When are you kids going to learn, you’ll never win?” he laughed in that high-pitched voice of his. With that, he put away his shootin’ irons and dug into the saddlebags over his shoulder. He handed out a big pair of wax lips filled with red syrup to each kid, calling some, like me, by name. When he got to Butch, he stopped, looked, looked again, then leaned forward to whisper in his ear, “Youngster, who are you supposed to be … Peter Pan?”

I thought, “He better know my name; he ran over my toes just last week, when I was selling papers in front of the Toluca Lake Pharmacy on Riverside Drive, and he still owes me for three weeks’ worth of the Los Angeles Times and Herald Examiner!” Day after day, it was “I’ll catch ya next time” as he sped off in his Cadillac.

We dried off as we continued on our prowl, wax lips stuck on our faces, trying to see who would be the last to bite and suck the red liquid dry. I shivered … Was this a preview of things to come?

As if drawn by some adolescent magnet, we found ourselves at the Diebels’ house. Mr. Diebel was a tire tycoon of some sort. But unless he was going to pass out new tires for our bikes, why were we all drawn to this particular house, without saying a word to each other? It had to be the Diebel sisters, Kay and Gretchen, the nicest and by far the prettiest girls in town. Gretchen was a little older than we were and Kay was about our age. Neither of them wanted anything to do with any of us, ever — a very wise choice on their part. The girls were nowhere to be seen, so we took our Hershey bar treats and moved on, strangely dejected. A few years later, when I was a lifeguard at Lakeside Golf Club, Gretchen inadvertently scratched me hard on the shoulder playing tag in the pool. I wear the scar proudly to this day! Kay later married Frankie Avalon, and Gretchen married Michael Wayne. Between them they had enough wonderful kids to field both sides of a baseball team.

One of the last houses on our rounds, before our annual date with certain death, was Tex Ritter’s. Every year we looked forward to Tex’s house more and more, and it wasn’t just because Tex would pass out Baby Ruths when we came in and Mrs. Ritter would secretly hand out more when we left. Most years, when he had a pretty good crowd, Tex would strap on his guitar and sing a song. Well, buckaroos, this was the year of High Noon, and Tex sang the theme song (music by Dimitri Tiomkin, lyrics by Ned Washington), which was the real treat. With the strains of this haunting melody still in our heads, we all stood a little straighter as we marched out the door to face our destiny.

Blood oath and all, there was no way we could avoid the ominous house on the right. Surrounded by a high wall capped with broken bottles stood the home of Dracula! Bela Lugosi had lived in this strange house on Whipple Street for as long as we could remember. Those who were unfortunate enough to have older brothers had heard a litany of horror stories. And for us, each Halloween seemed to prove them all true. The gang, reduced by one (Spike said he had to pick up his little sister — yeah, right) stood, once again, before the great oak door, silently daring someone to pull the heavy chain that would ring the bell.

Suddenly, the door creaked open. There, wrapped in his black cape, eyes glowing in the mist, stood the Prince of Darkness, bidding us welcome. A scratchy, badly recorded wolf howled in the distance as we, the shaking, the not very brave, entered the large, round entry hall. “Listen to them, the children of the night, what music … they make.” He spoke in that strange way we were sure all vampires were meant to speak. Mrs. Lugosi, who was a real nice lady 364 days a year but became Mrs. Dracula on Halloween, asked us if we would like a cup of blood. Even though it looked and smelled more like red Kool-Aid in a paper cup, no one ever drank any. She then asked her husband if he would like some. “I never drink… wine,” he replied. What that had to do with drinking Kool-Aid from a paper cup was a question not easily answered, not even by his son, Bela Jr.

He was a nice kid that none of the group really knew. He was the same age we were, but he didn’t go to school with us, or to any school we knew of. Butch, ever the sage, commented, “How can he go to school? He has to sleep in a box full of crummy old dirt during the day.” Years later, I heard from Boris Karloff’s daughter, Sara, that Bela Jr. had become a lawyer, so he stayed in the family business. Actually, Bela Jr. is a really good guy who used his legal expertise to secure and ensure the rights of his and other second-generation Hollywood families to the proprietary rights of their parents’ acting images and efforts. For decades, Universal used the likenesses of Lugosi and other stars for all sorts of merchandise sales that garnered hundreds of thousands, if not millions, of dollars for the studio, without recompensing their children. Bela Jr. changed all that, and many of our favorite stars’ children are eternally grateful.

“Won’t you bob … for an apple?” Dracula hissed, motioning to the big tub in the middle of the entryway. Now, here is where the trouble always started. We would spend the whole year trying to convince everyone, and especially ourselves, that this year would be different. We were not afraid. But, the picture in our minds never, ever changed. We were on our knees, our heads under water and our necks exposed, just asking to be bitten. And standing right next to us was the world’s champion 500-year-old biting machine. Not these cowboys! Once again, blood oath or not, we ran for the door. Butch led the way, his sword sticking out at an odd angle. As the story grew over the years, it was said a strange force stopped us at the threshold, so that no one could pass. In reality, as Dracula swirled his cape in the night, Butch’s antique sword jammed in the doorway and we all fell backwards into the hall. Apples, cowboys and one big kid in green tights went everywhere, and finally out the door.

A decade and more later, when I was no longer a kid, I had the privilege of producing a motion picture thriller, not with Bela, but with his great friend and screen nemesis, Boris Karloff, in one of his last films. The Sorcerers was made in London, directed by Michael Reeves, and also starred Catherine Lacy, Ian Ogilvy and Susan George in her first screen role. Boris, 80 and slightly enfeebled at the time, needed a brace on his leg, which worked well for his character. No matter his problems, he was a real professional. I would pick him up in the morning, listen to great stories, then drop him off at the studio. I’d put the top down on my car and take the trunk lid off to accommodate our second unit cameramen, one in the back seat and one in the trunk. Then, without any permits, we’d roar around London filming chase scenes for the film — first with the villain’s car, and then the police car giving chase, and after that we’d go hide. After a frantic day of eluding the cops, up would go the top, on would go the trunk lid, and I’d take Boris home, listening to more wonderful stories. Memories are made of this…

Bela Lugosi, some say, passed away in 1956, and his spooky old house and property eventually became an apartment complex. But the kid in all of us is sure that, for the pure of heart, when the moon is full and the wolf’s bane blooms, if you listen carefully at a certain spot at 10841 Whipple Street, you may hear, “I … am … Dracula. I bid you … welcome.”

Patrick Curtis was born and raised in Toluca Lake in the ’40s and ’50s. Following a long, shaky career as a kid actor (usually the fourth kid on the right) and after college, he went into film and TV production. His productions include A Swingin’ Summer, The Sorcerers, Raquel, The Beloved, Hannie Caulder and The Avenging Angel, to name a few. Patrick is the proud recipient of Saint Joseph Medical Center’s Beautiful People Award for his philanthropy in the community.